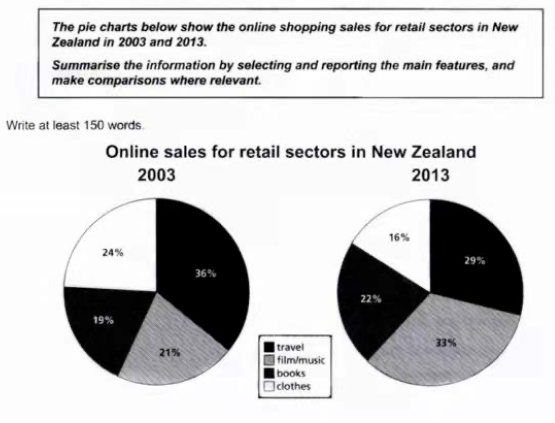 Depicted in the pies are the change in the proportion of New Zealand’s online sales of retail sectors. Overall, people paid more on entertainment in 2013 than they used to do.

2. In 2013, film and music accounted for roughly one third of the total, an increased share compared with 2003’s portion (one-fifth).

3. This largest sector was in marked contrast with clothing, which had a shrunken share in 2013 as the percentage decreased by eight points and to sixteen.

1. A proportional drop also occurred to the sales of travel.

3. Lastly, there was no considerable change in the sales of books, whose share stayed at around one-fifth despite a decrease.

In general, the variation between the two years was apparent.