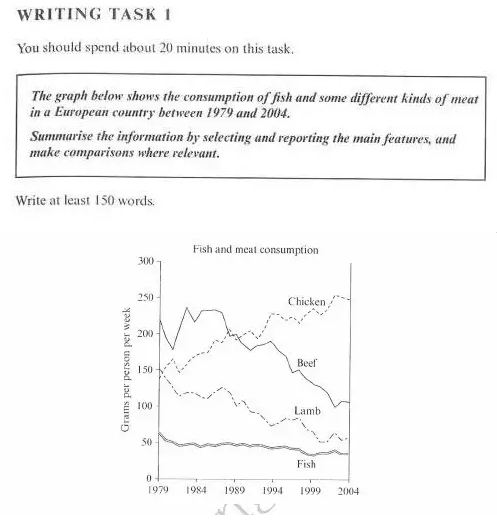 The graph illustrates changes in the amounts of beef, lamb, chicken and fish consumed in a particular European country between 1979 and 2004.

In 1979 beef was by far the most popular of these foods, with about 225 grams consumed per person per week. Lamb and chicken were eaten in similar quantities (around 150 grams), while much less fish was consumed (just over 50 grams).

However, during this 25-year period the consumption of beef and lamb fell dramatically to approximately 100 grams and 55 grams respectively. The consumption of fish also declined, but much less significantly to just below 50 grams, so although it remained the least popular food, consumption levels were the most stable.

The consumption of chicken, on the other hand, showed an upward trend, overtaking that of lamb in 1980 and that of beef in 1989. By 2004 it had soared to almost 250 grams per person per week.

Overall, the graph shows how the consumption of chicken increased dramatically while the popularity of these other foods decreased over the period.

Throughout, she illustrates her analysis with excerpts from discussions.

The case also illustrates that some women are now trying to fight back.

Alfred Adler , a famous doctor, had an experience which illustrates this.

In the course of the 1930s steel production in Britain approximately doubled.

Approximately $150 million is to be spent on improvements.

Prices did not alter significantly during 2004.

The two sets of figures are not significantly different.