Experiment 1 was repeated, except that in each trial an acetone/water solution was used instead of water and the temperature was kept constant at 250℃ (see Table 2).

Experiment 2 was repeated, except that in each trial a methanol/ water solution was used instead of an acetone/water solution (see Table 3). 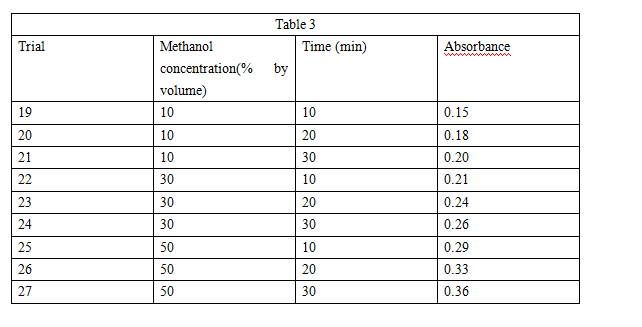 Suppose that in Experiment 3 a beet section had been placed in a solution that was 40% methanol by volume for 20 min. The absorbance of the sample from the resulting solution would most likely have been closest to which of the following?

Based on the results of Experiment 2, which of the following additional trials would have resulted in an absorbance closest to 0.80?

The results of Experiment 1 are most consistent with which of the following conclusions about the effects of temperature on membrane disruption and absorbance? Higher temperatures resulted in:

The student concluded that at a given concentration, acetone causes more membrane disruption than does methanol. Is this conclusion supported by the results of Experiments 2 and 3?

J. Yes, because at each concentration tested, less betacyanin was re eased in the acetone solution than was released in the methanol solution.

Answers for Practice: Practice 4 B H A H B J