Most plants require specific substances known as minerals to grow and reproduce. The following table provides a list of the minerals essential to flowering plants and a description of their functions. The first seven listed are called macronutrients, since they are present in large quantities in the plants. The other minerals are called micronutrients because they are often present in trace amounts. The number of pounds of each mineral required to grow 100 bushels of corn is also depicted in the table. 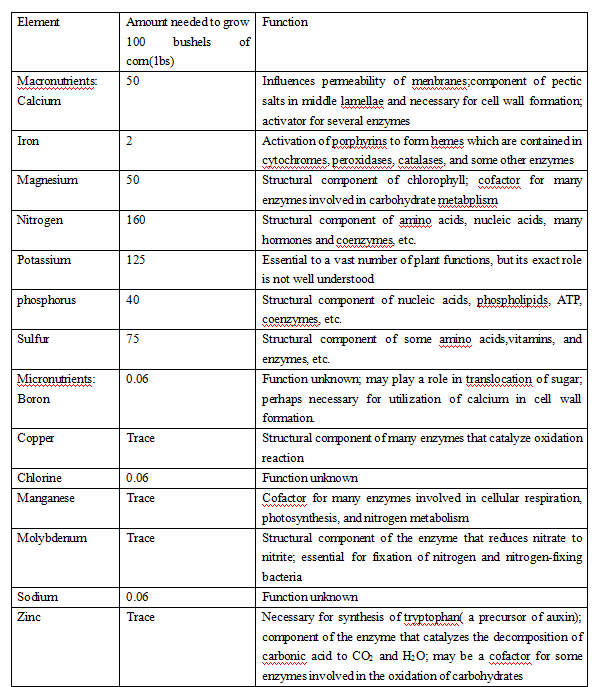 According to the information presented in the table, flowering plants require iron in order to:

A scientist hypothesized that some minerals are required in minute quantities and are used as components of enzymes by flowering plants. The data for which of the following minerals would support this hypothesis?

A botanist in South America found a new variety of corn identical to the type described in the table with the exception that it utilizes copper, instead of iron, in activating porphyrins. Approximately how many pounds of copper would you predict would be required to grow 100 bushels of this new corn?

Which of the following conclusions about the mineral requirements of flowering plants is consistent with the data presented in the table?

F. Plants require larger amounts of minerals than are available in the soil.

H. Deficiencies of certain minerals have little, if any, effect on plant growth.

J. The addition of minerals to the soil in the form of fertilizer results in a smaller yield of corn.

A researcher using the table concluded that minerals used as components of enzymes and as cofactors for enzymes are required in very small amounts. This is supported by the information given for all of the following elements EXCEPT: