Charlcs 1 was remowed from the throne and in I 660, Charles 1, who have been living in the France, was invited 10 retur from exile and rule England. Monarchy wis restored and the new period was called restoration. And Charles II began to reform the theatre. The old theatre was out of date.

There are two important person: Thomas and William Davenant, who are the playwrights before the civil war, when many theaters were closed. In 1 656, Davenant presented the Siege of Rhodes,

All the theatres were now indoor proscenium- arch buildings. Stages were divided into two distinct halves. the apron-the frstage im front of the proscenium, and the backstage. The proscenium doors were used for entrances and exists. Musicians played in the room above. The shutters would be opened and closed when the scenes changed.

At that time, many female actors began to perform in the theatre. Although they were not trained, they were good at acting. Nell Gwynn was the first celcbrity actor.

Another revolution happened in the playhouse and their audience. Audience were quite spinited in their behaviour during performances. They will spoke to the actors, arranged assignations with each other and atended the theatre 1o be seen rather than to see the play.

The play also changed a lot At that time, the most popular play was those have the characteristics of that period. Aphra Behn was one of the first English women 10 eam her living by her wring,she broke cultural barriers and served as a literary role model tor later gencrations of wormen authors.

At that time, tragedy was also wery popular. There was a famous performer names Thomas Betterton, who was noted for his dazzling characterizations of Shakespeare's tragic beroes,

1. Paragraph A- new beginning of monarchy and theatre

2. Paragraph B_ links with old times

3. Paragraph C- the change of layout in actor areas

5. Paragraph E-_ _the change of theatre and audience

6. Paragraph F-I the most typical style in that period

7. Paragraph G- comedy is not the only type of play

11. The front of the stage was called apron

12. During the play, musician were in the room above the proscenium- arch.

13. The shutters would be moved when a new scene began

14. Why do termite mounds have a system of vents?

A.To allow the termites to escape

15. Why E building is cheaper to build?

C.lt works well for almost all year around

18. One architect blieves that the building would be improved if

19. Warm air goes out of ffices through ceiling vents

20. Warm air goes out of buildings through chimneys

21. Stop sunlight to reach the building through cement arches

22. Big fans _bring air from outside

Which three parts of the E buildings shows Zimbabwe' s history and culture is important?

Orcas, also known as killer whales, are opportunistic feeders, which means they will take a variety of dfferent prey species. J, K and L pods (specilfie groups of orcas found in the

region) are almost exclusively fish eaters. Some studies show that up to 90% of thelr diet is salmon, with Chinook salmon being far and away their favorite. During the last 50 years,

hundreds of wild runs of salmon have become extinct due to habitat loss and overfishing of wild stocks. Many of the extinct salmon stocks are the winter runs of chinook and coho,

Although the surviving stocks have probably been suficient to sustain the resident pods, many of the runs that have been lost were undoubtedly traditional resources favored by the

resident orcas. This may be affecting the whale's nutrition in the winter and many require them to change their patterns of movement in order to search for food.

Toxic substances accumulate in higher concentrations as they move up the food chain, Because orcas are the top predator in the ocean and are at the top of several different food

chains in the environment, they tend to be more affected by pollutants than other sea creatures. Examinations of stranded kller whales have shown some extremely high levels|

presents the most serious threat to the continued existence of this orca population. Unfortunately, the total remedy to this huge problem would be broad societal changes on

many fronts. But because of the fact that orcas are so popular, they may be the best species to use as a focal point in bringing about the many changes that need to be made in

order to protect the marine environment as a whole from further toxic poisoning.

The waters around the San Juan islands are extremely busy due to intermational commercial shipping, fishing, whale watching, and pleasure boating. On a busy weekend day in the summer, it is not uncommon to see numerous boats in the vicinity of the whales as they travel through the area. The potential impacts from all this vessel trfflc with regard to the whales and other marine animals in the area could be tremendous. The surfacing and breathing space of marine birds and mammals is a critical aspect of their habitat, which the animals must consciously deal with on a moment-to-moment basis throughout their lifetimes. With all the boating activity in the vicinity, there are three ways in which surface impacts are most likely to affect marine animals: (a) collision (b) collision avoldance, and (C) exhaust emissions in breathing pockets. The first two impacts are very obvious and don't just apply to vessels with motors. Kayakers even present a problem here because they're so quiet. Marine animals busy hunting and feeding under the surface of the water, may not be aware that there is a kayak above them and actually hit the bottom of it as they surface to breathe. The third impact is one most people don't even think of, When there are numerous boats in the area, especially idling boats, there are a lot of exhaust fumes being spewed out on the surface of the water. When the whale comes up to take a nice big breath of "fresh" air, it instead gets a nice big breath of exhaust fumes. It's hard to say how greatly this affects the animals, but think how breathing polluted air affects us (i.e. smog in large cities like Los Angeles, breathing the foul air while stting in taffie jams, etc.).

Similar to surface impacts, a primary source of acoustic pollution for this population of orcas would also be derived from the cumulative underwater noise of vessel taffc. For

cetaceans, the underwater sound environment is perhaps the most critical component of their sensory and behavioral lvs, Orcas communicate with each other over short and long distances with a variely of clicks， chirps, squeaks, and whisles, along with using echolocation to locate prey and to navigate. They may also rely on passive listening as a primary sensory source. The long-tem impact from noise pollution would not likely show up as noticeable behavioral changes in habitat use, but rather as sensory damage or gradual reduction in population health. A new study at the Whale Museum called the SeaSound Remote Sensing Network has begun studying undenwater acoustics and its relationship to orca communication.

B. A type of salmon

C. A variety of animals

D. Fishing living at the bottom of the sea

32. Some groups of salmon have become extinct because

A. They have lost places to live

B. Whales have eaten them

C. They don't get good nutrition

D. The winters in the area are too cold 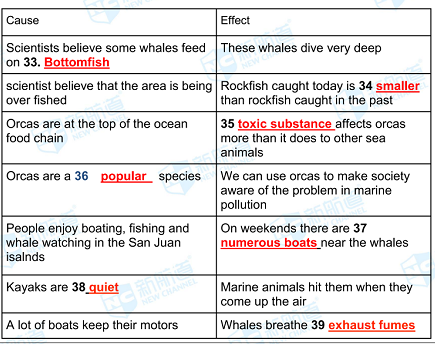