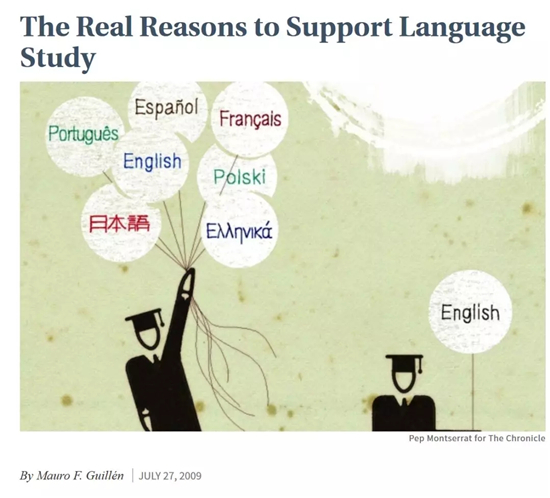 In an era of dwindling budgets, universities have identified language programs as an area for possible cuts. Languages with few students are being framed as luxuries that cannot be afforded during a time of scarcity. The target is easy: Language instruction is delivered by nontenured faculty members to a much greater extent than most other subjects are. Some universities have even announced that entire language departments might be eliminated as a way to, euphemistically, realign resource allocation with emerging priorities. There is a fundamental misunderstanding of the role that language learning should play in undergraduate and graduate curricula, which could seriously imperil the ability of the university to educate the students of the 21st century.

The conventional wisdom among university administrators is that languages are helpful only as tools to achieve an end, such as being able to live, work, or do research in countries where operating in English is not an option. My casual conversations with parents of students and with officials of external sources of support, including government agencies and foundations, reveal a similarly limited view. This stance is as shortsighted as it is widespread among the people who make key decisions about resource allocation across disciplines and programs, and among those who pay for our students' education.

For starters, research indicates that effective language instruction must be culturally grounded. Acquiring a language involves learning the culture or cultures intimately associated with it. Although business students, for example, can operate in English in a large number of countries, a deeper understanding of the cultures there would enhance their performance as employees or entrepreneurs. Interactions and negotiations in English may be possible, but there is nothing like knowing the local language to become aware of the nuances and the sensitivities involved in everyday life or work situations.

We also know from research and experience that acquiring another language makes students better problem solvers, unleashing their ability to identify problems, enriching the ways in which they search and process information, and making them aware of issues and perspectives that they would otherwise ignore. I have often observed that students with exposure to two or more languages and cultures are more creative in their thinking, especially when it comes to tackling complex problems that do not have clear solutions.

Learners of languages, by exposing themselves to other cultures and institutional arrangements, are more likely to see differences of opinion and conflicts by approaching a problem from perspectives that incorporate the values and norms of others as well as their own. Knowledge of other languages also fosters tolerance and mutual understanding. Language learning is thus much more than becoming operational in an environment different than one's own. It is a powerful way of appreciating and respecting the diversity of the world.

Another common misconception about the study of languages is that globalization has reduced the market value of most of them while increasing that of English, the lingua franca of business, science, and technology. According to that logic, students would be wise to invest their time and energy in other subjects once they have mastered spoken and written English. While it is true that major multinational companies use English at their most important meetings, I continue to come across case-based evidence indicating that if you work for a German, Japanese, Chinese, Swedish, or Brazilian company, you'd better speak the language of the home country, or you will be at a disadvantage when it comes to understanding the subtleties of decision-making and advancing your career. English proficiency may have become a necessary qualification for employment at most multinational organizations, but it is certainly not sufficient to pursue a successful professional career in an international context. The argument that the market value of the English language is increasing relative to the value of other languages, if pushed to its logical extreme, would present native English speakers with a false choice between allocating their energies to learning another language and focusing on other academic subjects.

Many universities have lost touch with an evolving reality in the international business world. Some undergraduate and graduate business programs claim to offer an international education, in some cases involving short study trips. But few integrate a rigorous course of study in languages with standard business subjects. At the graduate level, we have convinced ourselves that a one- or two-week trip to meet business leaders in some country can be a substitute for the deep study of at least one foreign language and culture. We are fooling ourselves if we believe that a global management education consists of short study trips instead of serious language instruction.

Students who are serious about engaging in a demanding activity, whether learning to speak a language or play a musical instrument, are more motivated to learn other subjects. The language learner is undaunted by the difficulty of the task and eager to benefit from the discipline that language instruction offers. I teach sociology and management courses to undergraduate and graduate students. Those who have knowledge of languages other than English tend to perform better.

By undermining the importance of learning other languages, we are losing an opportunity to educate our students to be better citizens of the world, and failing to provide them with the tools and mind-set they need to understand and solve complex problems. Learning a language exercises the mind and enriches the spirit. It is a fundamentally humbling process by which students learn that their culture and way of expressing it are relative, not absolute. That perspective makes them more open to other points of view, and more likely to avoid one-size-fits-all solutions to the problems of the world.