Applying for a Part-time Job 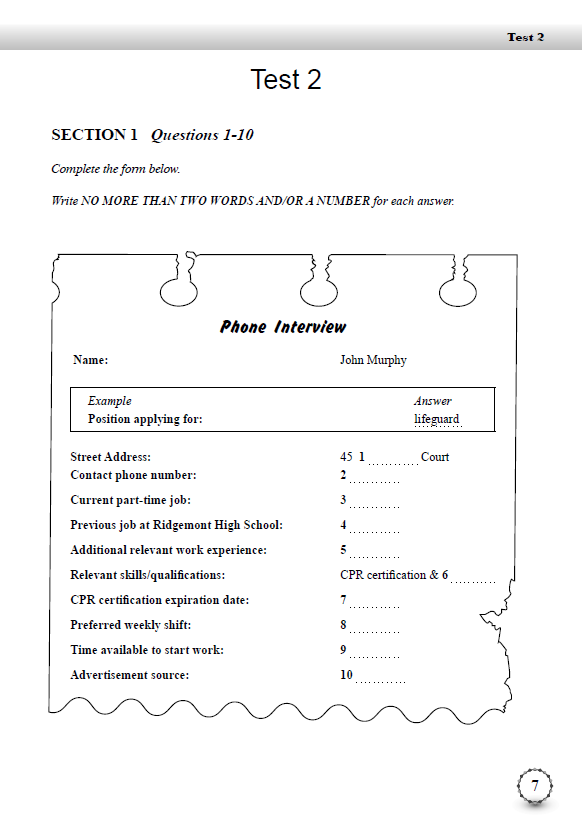 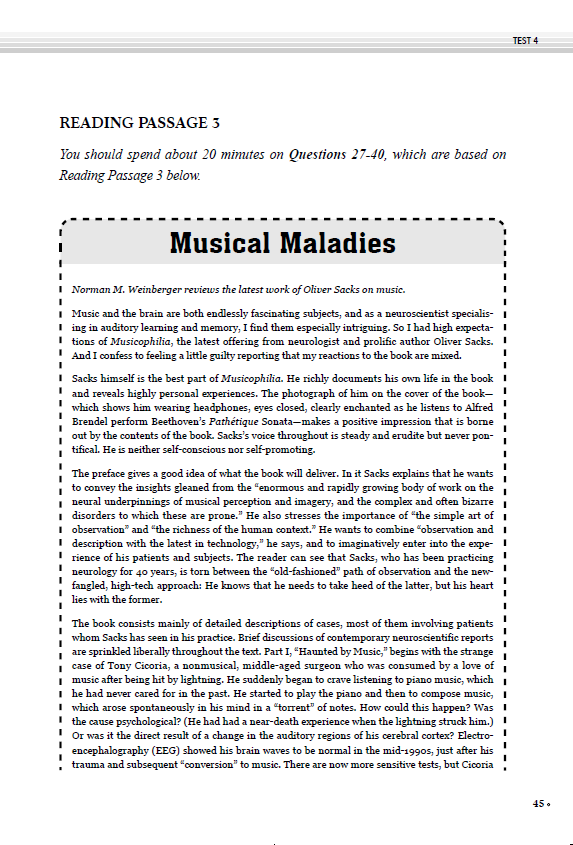 man makes a call to apply for lifeguard job

4. at a high school baseball coach

8. has a willing to work at Saturday

10. where he knows the job: on the radio

B can't not be done yet

Participants are required to do a

27. listening task and they should work as a

28-30 Which Three things should be put in the conclusion of the presentation?

31.Deserts need wind to cool down the street

32.Deserts can show consumption of electricity on a display for individuals.

33.The water temperature and time of having a shower can be regulated.

34.People can use electronic cars without a driver when they get around.

35.Build glass pavement on the roadsides, using mirrors to capture the sunlight.

36.There is a large umbrella shaped like a flower.

37.landscape: using ash adding into concrete with acid to the building's exterior

38.There is a park in the heart of the city.

39.build a fountain for people to walk around.

40.In the future, houses will have lowest carbon emission

Describe a person who is polite礼貌的人

Describe a time when you saw children behave badly in public熊能亥子

Describe a time when you made a promise to someone 对某人许诺

Describe a time when you give advice to others 给别人建议

Describe a time when you ate something for the first time次吃某种东西

Describe a perfect job you want to have 想拥有的理想工作

Describe an interesting tradition in your country有趣的传统

Describe the area of science (e.g. physics, medicine, psychology) that you are interestedin感兴趣的科学

The Baobabs of Madagascar

1.All baobabs species are found in this region. False

2. Grandildieri baobabs can be found in most areas of Madagascar. False

6. The reasons lead to the damage of Baobabs forests are clear. False

7. water near by area

11. two kinds of animals are killed

Should leaders be promoted from within the company, or hired from

Music and the brain are both endlessly fascinating subjects，and as aneuroscientist specialising in auditory learning and memory, l find them especiallyintriguing. So l had high expectations of Musicophilia,the latest offering fromneurologist and prolific author Oliver Sacks.And l confess to feeling a little guiltyreporting that my reactions to the book are mixed ( 27，31题) .

Sacks himself is the best part of Musicophilia. He richly documents his own life inthe book and reveals highly personal experiences.The photograph of him on thecover of the book which shows him wearing headphones，eyes closed,clearly enchanted as he listens to Alfred Brendel perform Beethoven's PathitiqueSonata--makes a positive impression that is borne out by the contents of the book(32题).Sacks's voice throughout is steady and erudite but never pontifical.He isneither self-conscious nor self-promoting.(28题)

The preface gives a good idea of what the book will deliver. In it Sacks explainsthat he wants to convey the insights gleaned from the enormous and rapidlygrowing body of work on the neural underpinnings of musical perception andimagery, and the complex and often bizarre disorders to which these are prone."He also stresses the importance of Mthe simple art of observation" and Mtherichness of the human context.He wants to combine observation and descriptionwith the latest in technology,"(29题)he says,and to imaginatively enter into theexpe-rience of his patients and subjects. The reader can see that Sacks, whohas been practicingneurology for 40 years，is torn between the old-fashionedpath of observation and the new-fangled,high-tech approach: He knows that heneeds to take heed of the latter， but his heart lies with the former.

The book consists mainly of detailed descriptions of cases, most of them involvingpatients whom Sacks has seen in his practice.Brief discussions of contemporaryneuroscientific reports are sprinkled liberally throughout the text.Part l,MHauntedby Music," begins with the strange case of Tony Cicoria,a nonmusical,middle-aged surgeon who was consumed by a love of music after being hit bylightning. He suddenly began to crave listening to piano music，which _ he hadnever cared for in the past. He started to play the piano and then to composemusic，1 which arose spontaneously in his mind in a u torrentw of notes. Howcould this happen? Was l the cause psychological? (He had had a near-deathexperience when the lightning struck him.) Or was it the direct result of a changein the auditory regions of his cerebral cortex? Electro-encephalography (EEG)showed his brain waves to be normal in the mid-1990s, just after his trauma andsubsequent Mconversionw to music. There are now more sensitive tests，but Cicoria has declined to undergo them; he does not want to delve into the causesof his musicality. What a shame!(30题)

Part ll,"A Range of Musicality," covers a wider variety of topics, but unfortunately,some of the chapters offer little or nothing that is new(33题).For example, chapter13, which is five pages long, merely notes that the blind often have better hearingthan the sighted. The most interesting chapters are those that present thestrangest cases. Chapter 8 is about "amusia,"an inability to hear sounds asmusic， and “dysharmonia，"a highly specific impairment of the ability to hearharmony，with the ability to understand melody left intact. Such specificdissociationsw are found throughout the cases Sacks recounts.

To Sacks's credit,part lll，"Memory，Movement and Music," brings us into theunderappreciated realm of music therapy. Chapter 16 explains how "melodicintonation therapy" is being used to help expressive aphasic patients (thoseunable to express their thoughts verbaDy following a stroke or other cerebralincident) once again become capable of fluent speech. In chapter 20，Sacksdemonstrates the near-miraculous power of music to animate Parkinson's patientsand other people with severe movement disorders, even those who are frozen intoodd postures. Scientists cannot yet explain how music achieves this effect.

It's true that the causes of music-brain oddities remain poorly understood.However,Sacks could have done more to draw out some of the implications of the careful observations that he and other neurologists have made and of thetreatments that have been successful.For example, he might have noted that themany specific dissociations among components of music comprehension,such asloss of the ability to perceive harmony but not melody，indicate that there is nomusic center in the brain ( 37题) .Because many people who read the book arelikely to believe in the brain localisation of all mental functions, this was a missededucational opportunity.

Another conclusion one could draw is that there seem to be no Mcuresff forneurological problems involving music. A drug can alleviate a symptom in onepatient and aggravate it in another, or can have both positive and negative effectsin the same patient. Treatments mentioned seem to be almost exclusivelyantiepileptic medications,which "damp down" the excitability of the brain ingeneral; their effectiveness varies widely ( 38题).

Finally，in many of the cases described here the patient with music-brainsymptoms is reported to have "normal”EEG results ( 39题) . Although Sacksrecognises the existence of new technologies, among them far more sensitiveways to analyze brain waves than the standard neurological EEG test, he does notcall for their use. In fact,although he exhibits the greatest compassion forpatients, he conveys no sense of urgency about the pursuit of new avenues in thediagnosis and treatment of music-brain disorders(36题).This absence echoes thebook's preface, in which Sacks expresses fear that wthe simple art of observationmay be lost" if we rely too much on new technologies. He does call for bothapproaches(40题), though,and we can only hope that the neurological communitywill respond.

27.The writer expected it to be better than it was.

28.He included autobiographic details in his book

29.He tries to come to terms with new technologies.30.He was unwilling to take more sophisticated tests.31-36为判断题

31. lt feels uncomfortable to give a well-respected writer a less than favourablereview.

34. Sacks should be more skeptical about other theories and findings.

35. Current drugs will be phased out with the development of study of music.

36. Sacks is impatient to use new methods to treat music-brain disorders.

37. Loss of the ability to perceive harmony but not melody

答案: suggest musical centre is not located in the brain.

38. Different outcomes of treatments for patients

答案:means the effectiveness of drugs vary.

答案: should not be used in isolation. 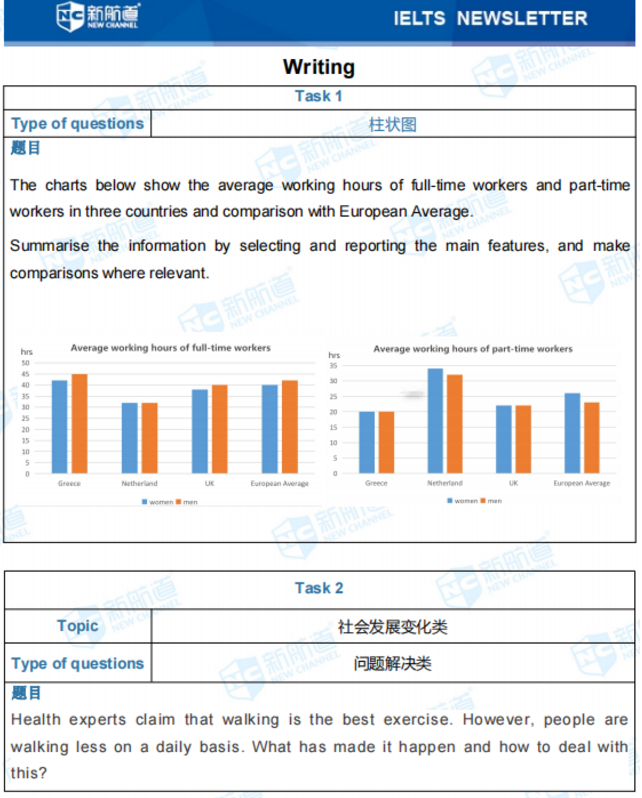